Some time back I had written on the metaphor of “Kintsukuroi” with regards to the Christian Faith… particularly our understanding of humanity (theological anthropology). I noted that in the Japanese pottery artform of “golden repair,” beauty is seen in the accentuation of the repairs rather than the hiding of repairs. The making of beauty out of destruction is a redemptive act, and demonstrates the true skills of a master craftsman.  If you want to see those posts, click below. Both are good, but the 2nd post contains my theological perspective of the metaphor. : 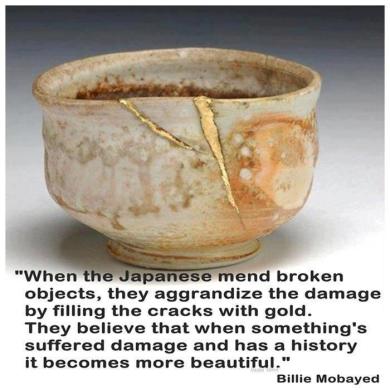 But one could see the artform of kintsukuroi as being based on an aesthetic viewpoint known as “Wabi-sabi.” (Do not assume I am an “artsy” person. I am not. But I do love a good metaphor.) Pulling a little bit of Wikipedia:

Wabi-sabi represents Japanese aesthetics and a Japanese world view centered on the acceptance of transience and imperfection. The aesthetic is sometimes described as one of beauty that is “imperfect, impermanent, and incomplete”

For many of us, our aesthetic is guided, often unconsciously, by the Greek ideal. Beauty is seen in:

These ideals not only affect our aesthetics, they affect our theology as well. I have previously noted two “attributes” of God in Christian theology that seem to be based more on Platonic thought than on Biblical revelation. I believe this has led us to a very mistaken picture of God.

. These are the Immutability and Impassibility of God. (See post HERE)

It seems as if God finds beauty outside of Platonic Ideals. Of course, in Greek thought, the natural world was bad or flawed, while the spiritual world is good. Although, the New Testament utilizes the metaphoric contrast of the carnal and the spirit, it is clear that Paul is not rejecting creation. God created a wild, diverse, amazing, ephemeral-transient world in Genesis 1 and described it as “Very Good.” God created man “in His own image.” People like to argue what that means. But what is inarguable, is that mankind has diversity of size, looks, hues, and gender. As a child, I remember having a Bible story book and in it, there was the story of Adam and Eve. In the book, the it said that God created Eve and Eve was the most beautiful woman in the world. I suppose in Genesis 1 that would have to be true. But in the book, they had a picture of Eve. She had the look of a 1950s ideal for beauty (a la Ava Gardner and Grace Kelly) including 1950s style make-up. My suspicion is that neither Adam nor Eve would be considered particularly appealing or photogenic today. Their “beauty” is found in their unique “imperfections” that God gifted them with. That should be comforting to us. Redemption would be bringing us in line with God’s ideal for us, not our own ideal.

While we promote certain looks as ideal or beautiful, God sent His son having nothing in His looks to draw special attention to Himself. Jesus suffered mutilation at the hands of the evil and ignorant, but when God raised Him up, He left Jesus with the scars of His ordeal. It seems as if the disciples were more convinced of the power of God demonstrated in these scars than they were by Jesus’ transfiguration.

“My grace is sufficient for you, for My power is perfected in weakness.” Therefore I will boast all the more gladly in my weaknesses, so that the power of Christ may rest on me. 10That is why, for the sake of Christ, I delight in weaknesses, in insults, in hardships, in persecutions, in difficulties. For when I am weak, then I am strong. II Corinthians 12:9-10

You might argue that this passage does not relate to “wabi-sabi” and I suppose you are right. But it certainly does not line up with Greek ideals or Roman virtues either. It seems to me that we can draw a bit of “wabi-sabi” into our understanding of redemption. (Note: there are aspects of the philosophy of wabi-sabi that I am not promoting. I am simply noting that aspects of it may be valuable to consider in our faith.)

God created us as limited, diverse, transient, imperfect beings. Our redemption is not the negation of those things, but the fulfillment of our creation. We were fearfully and wonderfully made, and I believe heaven will be full of people who share one thing in common– an absolute failure to conform to our present ideas of perfection.

God’s work in perfecting us, is a redemptive act of making us what we were meant to be. But what we are meant to be is far different than what we think is perfect.

You may want to look at Part 1 of this Post

Pottery is big in the Bible. No surprise since pottery was highly useful (as it is now) and was pretty high tech. Having taken a class in high temperature materials back in my mechanical engineering days, I can confirm that pottery-making/ceramics is still high-tech.

Pottery also has a lot of metaphoric value. The passage starting in II Corinthians chapter 4 speaks of humans as being “jars of clay.” Of course there is a semi-literal sense. We are described as being formed of the dust of the earth (which, in itself, is a semi-literal metaphor). Additionally, pots are both fragile and durable. They break easily, but also potentially have the ability to last pretty close to forever, and protect their contents pretty much forever.

But what do you do with a flawed or broken pot?

1.  Reform it. This is before firing in the kiln. The base material (clay or mud or whatever) has not been hardened through heat. Romans 9:19–21 speaks of this in terms of God being the potter and we being the moldable medium (like clay). Isaiah also uses this theme in chapters 29, 45, and 64. The idea is that God has the ability to determine our own form as He chooses.

A problem with the metaphor is that it suggests that transformation is only realistic at the beginning. Once it is fired, it can’t be remade. Of course, that limitation was based on the technology of the time… not necessarily suggesting that transformation in a human life is impossible later. Transformation at a later date in the Bible is described in other ways such as being born again or being made a new creation/creature.

2. Accept the destruction. If it is flawed, or cracked, it can be destroyed. The last chapter of Ecclesiastes describes a broken pot as a metaphor for death. Job uses the question of God returning fired clay back to unfired clay (“dust”) as being metaphoric of his being destroyed by God (Job 10:8-9).

In the Philippines we have a game, “Pukpok Palayok.” Earthenware used as inexpensive serving dishes (“palayok”), are filled with goodies and hung on a string to be broken as a game (similar to the pinata). Near us there is a restaurant Isdaan where one can pay to break dishes and other items (a bit like the Greek tradition of breaking dishes as a form of expensive celebration). One is reminded of Romans 9:22. In this passage there is the implication of pottery…  “…vessels of wrath prepared for destruction.” Some use this to suggest that God elects some to hell. While such an interpretation is consistent with the passage, it is not the only interpretation… and one has to address passages where God’s love and sacrifice is described as made available to all.

But of more interest to me is what one does in accepting the destruction. Commonly, the broken pieces are thrown out. Sometimes they are utilized as shards. Job used pieces of broken pottery to scrape his diseased skin since the edges are sharp and rough… having not had opportunity to be eroded down. However, more recently, broken pottery has been found useful by archaeologists to gain great insight about ancient cultures. Their fragility caused them to be thrown away, while their durability ensured the pieces remain to enlighten about things that have otherwise faded away.

3.  Restore. Broken or cracked (post-fire) pottery have been traditionally thrown away because repair is difficult and expensive. Additionally, it is easier to start over. But there is at least one ancient way of restoring, and two more modern ways. Lets look at these:

I would like to suggest that Kintsukuroi is a useful metaphor for our lives as Christians. While moldable clay shows God’s role in creating us… making us beautiful in His eyes… Kintsukuroi describes how God transforms our broken lives. The transformation does not restore us to our original condition, but to something better. The repairs are not to be hidden, deceptively covered up, but visible to demonstrate the power and the skill of God who restores and transforms things to a more beautiful, glorious state.

Often we describe heaven in terms of unflawed beauty. But perhaps that is more of a Greek ideal, than Biblical ideal. When Jesus was resurrected from the dead, His resurrected body still had the scars of the crucifixion on it. Thomas was able to identify Jesus and thus identify God’s true power through those scars. Sometimes “flawed beauty” is better than “unflawed beauty.”

It is entirely possible that we glorify God most NOT when we appear to have no flaws, but when those flaws point to God’s power and glory in their evident repair. A lot of Christian workers and churches like to appear to be unbroken… but people know that breaks are there… hidden. They know Christians and churches have waxy seams.

Kintsukuroi is a Japenese word for “Golden Repair.” It is related to another Japanese term,Kintsugi (“Golden joinery”).  It refers to pottery repair. The repair has two purposes:

a.  To restore something that is both physically and functionally broken.

b.  To increase beauty by enhancing the break lines rather than seeking to hid them.

Before applying this concept to faith, salvation, and theology… here are a couple of quotes and a webpage to consider:

“Imperfection is in some way sort of essential to all that we know of life. It is the sign of life in a mortal body, that is to say, of a state of progress and change. Nothing that lives is, or can be, rigidly perfect; part of it is decaying, part nascent… And in all things that live there are certain irregularities and deficiencies which are not only signs of life, but sources of beauty… To banish imperfection is to destroy expression, to check exertion, to paralyze vitality. All things are literally better, lovelier, and more beloved for the imperfections which have been divinely appointed, that the law of human life may be effort, and the law of human judgment, mercy.”   -John Rushkin (quoted in the webpage listed below.)

Not only is there no attempt to hide the damage, but the repair is literally illuminated… a kind of physical expression of the spirit of mushkin….Mushin is often literally translated as “no mind,” but carries connotations of fully existing within the moment, of non-attachment, of equanimity amid changing conditions. …The vicissitudes of existence over time, to which all humans are susceptible, could not be clearer than in the breaks, the knocks, and the shattering to which ceramic ware too is subject. This poignancy or aesthetic of existence has been known in Japan as mono no aware, a compassionate sensitivity, or perhaps identiﬁcation with, [things] outside oneself.   -Christy Bartlett (quoted in Wikipedia article “Kintsugi”)

Kintsukuroi – The gentle art of soul restoration, by Audrey Meyer

Continue on to Part 2