What is a “3F” Missionary? This is the traditional missionary of the 19th and 20th centuries.

F Fully Funded (not bivocational, or self-funded, but financed by churches or Mission organizations remote from where the mission work occurs.)

F Forever (serve in one place until death or retirement. No moving around or short-terming it)

One could add a fourth F:

F Full-time (not part-time, not short-term, not bivocational)

However, generally if one is fully funded and “forever” it would be presumed one is full-time. 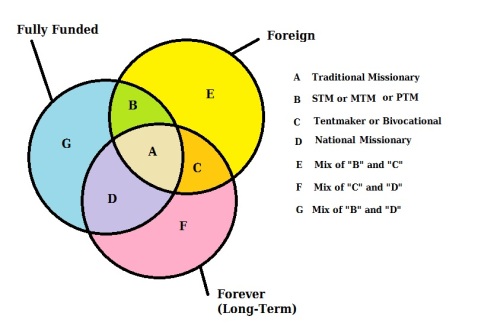 3F Missionary is the missionary of the “missionary call”. The missionary call is based on the belief that certain people are specially called to mission work and they must serve full-time, financed, and forever. Other people who are not called, cannot (or should not) be missionaries. But this understanding is changing.

“During the last half-century, however, a number of changes have ensued which have tended to diminish the traditional emphasis on being called to be a missionary:

(1) The decrease in the number of persons willing to offer themselves as vocational missionaries, that is, missionaries for life;

(2) The difficulty of obtaining permission for such persons to enter many countries as vocational missionaries and/or to remain there indefinitely;

(3) The new models of what it means to be a missionary;

(4) The inclination on the part of many young people today to ignore the traditional and “artificial division between mission in Jerusalem and mission to the ends of the earth”;

(5) The relative ease and speed of travel which is prompting an increasing number of individuals who think of mission work as a short-term task; and

(6) The increased readiness of many missionary sending agencies to depend more and more on short-term personnel.”

Looking at these six reasons, why has there been a growing change in attitude about the “Missionary Call”?

KEY #1. The world is changing (Transportation has made travel easier)

Key #2. The underlying theology of missions is being questioned . (Why is “ends of the earth” work thought fundamentally different from “Jerusalem” work? Why does being a missionary mean full-time, vocational, and one location?)

RESULT. People are looking to new flexible models of missions. These include short-term missions, bivocational missions, and even cyber-missions.

I believe that both Keys are valid and reasonable. The world is changing. The underlying theology of missions is under attack, and for good reason. Our theology must live in the tension between unchanging divine revelation and changing culture. The argument for only allowing the 3F Missionary is that unchanging revelation calls for it. But this is being questioned. Paul (whose call is often used as a reference for a missionary call) does not fit the 3F model. He was bivocational, he travelled from place to place, and it is even questionable whether the work he did was always missional (as is today commonly understood). The Apostle John appears to have been known later in life as John the Elder (yes, there is some argument about this). Since “apostle” essentially means missionary, this seems to suggest that John recognized his own change of role later in life as moving from missionary to church leader. Additionally, the fact that some individuals have been undeniably, miraculously called, does not mean that others weren’t. What was the calling for the 12 disciples? Was it “Follow Me” at the beginning of their ministry with Christ, or the Great Commission? If it is the Great Commission, William Carey (and many since) have shown that the wording makes it clear that it is a general calling for all believers to share the Gospel. If it is the “Follow Me and I will make you fishers of men”, then this sort of calling appears to be more like a path. The disciples were to go wherever Jesus did and would do what Jesus said. So changing roles (as John appeared to do) is not a pro9blem. This hardly seems to fit the narrow understanding of a 3F missionary.

Don’t get me wrong. I am not against 3F missionaries. Arguably I am one. I serve in a “foreign land.” I am financed (under-funded, but still funded), and I hope to do this forever. And I see myself as full-time. I also feel like God called me in a very specific and pointed way to be a missionary. I also think that 3F missionaries are very useful in providing a healthy bridge between cultures in ministry. Short-term missionaries can often do more harm than good… especially if there is no one to guide them.