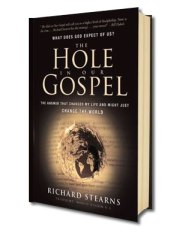 Referring to the book, “Prayer of Jabez,” Stearns wrote:

The gist of the book was that if we would truly pray for God to bless us in this way, to be used by Him for the kingdom, good things would happen– God would “enlarge our territory,” and we would be able to serve Him in a deeper and expanded way. Nothing wrong with that. But many who read the book interpreted it differently. Their understanding was that God intends to bless us with things, such as career success, financial gains, and other outward signs of prosperity– all we have to do is ask. For many, in fact, the book became a celebration of the “prosperity gospel”– the belief that God rewards faithful and sincere Christians with success, good health, and material prosperity.

… Listen to what really happened to Paul when God expanded his territory:

We might want to think twice before we ask God for that kind of blessing. The Bible is replete with those God used to do His will but who paid a great price. Ten of the twelve disciples died as martyrs for their faith. John the Baptist was beheaded by Herod. Isaiah was sawed in two. Over the centuries millions have been martyred for their faith in Jesus Christ, and many others have been afflicted. Joni Eareckson Tada, who now ministers to thousands, began her greatest ministry after her territory was enlarged– by a diving accident that paralyzed her. … Thousands of missionaries have lived difficult lives of sacrifice in relative poverty and deprivation as God expanded their work and ministries in the places they served. God doesn’t promise that all of His followers will be protected from hardship and suffering. Christians get cancer, lose loved ones, and suffer financial setbacks just like everyone else. But God can also use our tragedies to expand our territory in ways that show a skeptical world a different way to live.

I have to admit that I read the book “The Prayer of Jabez” and it sure looked to me as if the author was indeed promoting “Prosperity Gospel.” Perhaps Richards Stearns was giving Bruce Wilkinson a bit of a benefit of the doubt. We all can use a bit of grace at times. “Blessed” with hardships and struggles is a difficult concept. It relates to “religious thinking” as described by Bronislaw Malinowski (religious behavior to seek to be guided by the divine) rather than “magical thinking” (religious behavior to manipulate the divine), or dog theology over cat theology (drawing from a recent book).

One thought on “So You REALLY Want to “Enlarge Your Territory”?”