I have been teaching Missions History this term in Seminary. Since I live and teach in Asia, I like to focus on missions history in Asia. Frankly, there is a lot more missions history in the East than the West anyway. In the first millennium, the churches of Jerusalem, Antioch, and Edessa spread the faith throughout Mesopotamia, Arabia, India and Persia. Later the “Nestorians” spread it through Central Asia to China, Korea, and beyond. The second millennium has the Russian Orthodox sweep across northern Asia, and the Protestant and Roman Catholic moves into Southern and Eastern Asia. Finally, with the dawn of the third millenium is the incredible reversal with 2/3 world (global) missions going into Asia and coming from Asia. But a good question came up as I was talking about the “Nestorian” (or Church of the East) missions in the first millennium.

Why did the greatest missionary effort (prior to the 1800s perhaps) result in so little long-term gain?

Of course, it is popular to blame Islam, or xenophobic Chinese emperors. But neither truly answer the question. The Coptic church in Egypt has survived (and often thrived) with persecution (of varying degrees). The church has even grown miraculously under persecution (such as in 20th century Maoist China, and in the 3rd century Roman Empire). Some argue that the outreach never really went beyond the Trading centers (perhaps a valid point). Some argue that there was a lack of contextualization and indiginization of the faith regionally (perhaps true in some locations… but not in others). I don’t have a good answer… but always willing to suggest a good theory. I would like to think that there may be a wee bit of truth tucked away in it. Nestorian missions at its height, such as from 628-643 under Patriarchate of Yeshuyab II, was quite organized with a wholistic outreach at cities along the overland route of the silk road. Among the structures that would be set up include:

The Nestorian missions points were, so I am led to understand, centered on the monastery: 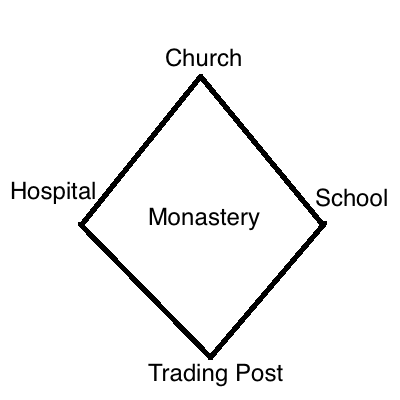 The Nestorians were not the only ones to do this. The Celtic missions movement of the first millenium was also centered on the monastery. But of course, they did not have to do it this way. They could have had the church as the center point. 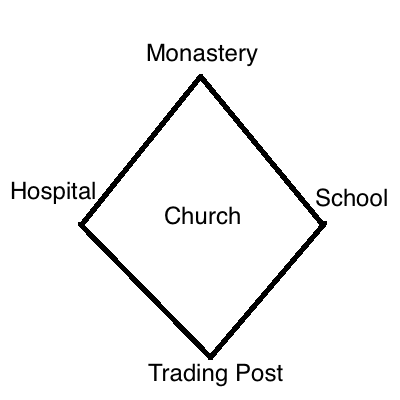 If one looks at these diamonds, one sees a nice wholistic support system… educational, economic, physical, and sociospiritual. But one might wonder at the apparent redundancy of having two entities that were sociospiritual… the church and the monastery. But the two are very different. Some would describe the church as a modality structure and a monastery as a sodality structure. I guess, to avoid more fancy words, one could say that:

A church exists as an assembly (and assembling) of local Christians. It exists for believers to worship, fellowship, support each other. A monastery is a handpicked group of Christians who have joined together for a specific purpose. For Nestorian missions… the monastery was a missional structure. What do we see when a missional sodality (or purpose centered) structure is the key? Very rapid growth of missions… a nice thing. We saw it in Nestorian missions and in Celtic missions. In fact, most missional movements were driven by sodality (purpose-centered) structures… at least at first. What do we see long-term when sodality structures remain the center? With the Nestorian movement, it eventually lost its missional vigor… and the movement faded (not disappeared… but faded). With the Celtic movement, it was swallowed up by the Roman structure (which was centered, ultimately, on the church, not the monastery).

So if this observation has any merit, what would that suggest?

Missions is driven (at least on the frontier) by sodality (missional purpose-centered) structures. However, to endure, the center should transfer to the church. The people (local people) are the key to longevity.