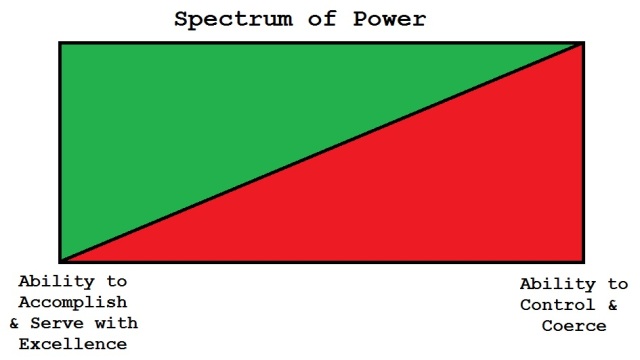 I have struggled in my own heart and mind regarding the issue of Power and Powerlessness in the Christian Life and in Ministry. I have heard so many preachers who love to talk about receiving the POWER of God (and Yes, they will emphasize the term completely out of proportion to its value, in my opinion). It does not appear to be in line with the example of Christ who served and ministered in a fairly powerless fashion (at least powerless in terms of classic human power such as economic power, military power, and political power). On the other hand, in some ways, Jesus could be describe as possessing and exhibiting great power. That leaves me challenged on both sides.

I think that part of the way of bringing this all together is to see power in terms of a spectrum. The spectrum at the top shows this. At one extreme, power is seen in terms of control and coercion. At the other end, it is seen in terms of ability to serve. That full range seems to be Biblical. The Greek word “dunamis” also can mean “Ability.” (Some note the connection between the word “dunamis” and “dynamite,” but the connection was in marketing. Dynamite provides no useful role in understanding the Koine Greek term “dunamis.”) In engineering, power refers to the rate of energy flow. “Energy” flow describes an essentially made up concept (that somehow manages to be useful) referring to the ability to do work. Power, then, is more tied to the ability to accomplish, than to mastery or control.

In the Luke passage, Jesus says to wait until they are clothed in power on high. One may take the “tongues of fire” on their heads as a somewhat literalistic answer to that. On the other hand, it can be seen more in terms of their sudden ability to serve God fearlessly, speaking God’s message in languages they did not know. Either interpretation seems sound, but classic human pictures of power would not be consistent with this event.

Likewise, Hebrews 11 describes doing great and mighty works through faith, yet it, equally, describes people succumbing to abuse and torture fearlessly (and in human terms, powerlessly) with those who accomplished the (“powerfully”) miraculous.

I am still a bit unresolved on this. The Bible says that the Jews seek a sign, while the Greeks seek wisdom. A sign often involves a visual manifestation of power. I don’t think that can be overlooked… it was a cultural need. I relate more with the Greek culture. I seek wisdom (and peace).

However, since power in and of itself is morally neutral, the exercise of power is morally ambiguous, a temptation for great evil as well as the ability to do great good.

Biblically, I believe that power is tied more to ability and servanthood than to mastery, control, and the miraculous. That is not to say that it is fully to the extreme (to the left side). But, when in doubt, Divine power is more tied to what the world sees as powerless. It seems like the church has been strongest when it has embraced its own powerlessness— fearlessly. Christian leadership is to be Servant Leadership… servant leadership not simply as a buzzword, but a lifestyle.

Because of this, the power of God as a concept should be tied to, and perhaps even be subordinate to, our call to be faithful, able, and humble servants of God.