Nice chapter/article in the book Preach the Word 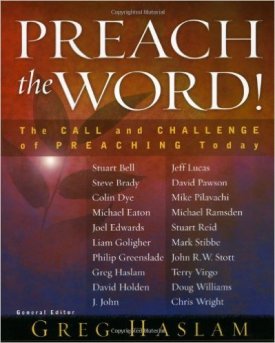 , edited by Greg Haslam.  The Chapter (28) is “Preaching from Narrative” by  Chris Wright. The chapter is fairly short but has good info in it… especially on the nature of narrative. Under How Do Stories Actually Work?, Wright puts some good notes. I will just give the main points here, with my own thoughts after.

I would like to add a quote from a different section of the chapter:

Avoid being too dogmatic.  We need to remember that a story can have many levels of meaning and new meanings will often suggest themselves as we take time to ponder and reflect upon them. Furthermore, other people will often see meanings that would never have occurred to us, and people from other cultures will often see a story in a totally different light, which can lead to a fascinating exchange of ideas. I think God gives us stories and says, ‘Well there you are. What do you make of that?’ Sincere there is such a tremendous richness in the stories of the Bible we should avoid giving the impression that there is one solitary monochrome meaning and, once you have explained that, you can go on to the next one.

Of course, this provides a hermeneutical challenge. Centuries ago, scholars saw the Bible as have several layers of meaning, such as literal, spiritual, and allegorical. Present thinking is to see the Bible as having only one meaning… the literal. So when one reads a passage of Scripture, one must seek that one single meaning. While recognizing the dangers of allegorical interpretation (among others), stories, like metaphors, resist a single interpretation. Even focusing on “author intention” may not be enough. When I tell a story, I often have more than one message or interpretation… even for fictional stories. For non-fiction, my selection of the events I use and connect may limit the range of possible interpretations, but non-fiction has a special “muddiness” to it that even more so draws us into the story with important different perspectives. For example, why did Judas betray Jesus? Was he seeking to “force Jesus hand?” Was he disenchanted with the lack of direction of the “revolution?” Was he possessed by the devil? Was he simply greedy? The fact that the Bible doesn’t clearly tell us why may (as Walter Wangerin pointed out) in fact point out to us some acts are just inexcusable and unjustifiable.