When I was young, a TV show I liked to watch was called “To Tell the Truth.” One person with an interesting job or story would be joined with others to talk to a board of celebrity panelists. The goal of the panelists iwas to determine who is telling the truth and who is lying. The goal of the contestants is to all talk as if, and answer questions as if, they they are the person being presented. Fooling the panelists would put money in the pockets of the contestants. My understanding is that they have revived this show in the US, but I haven’t seen it since I am now in Asia. 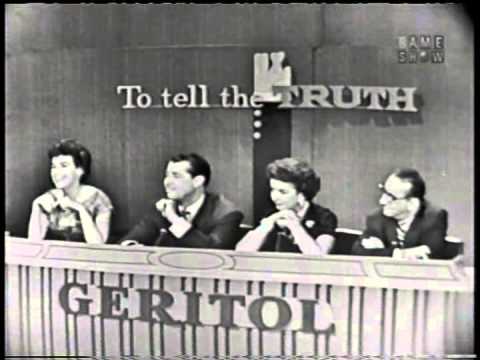 The goal in the show, really, is not to lie but to deceive. Fooling the panelists is the aim, regardless of whether one uses lies or truth or half-truths or deceptive language.

Lies are a rather complicated thing. When young we are told that lying is telling something that isn’t true. But most jokes, parables, hypothetical problems, and such are, strictly speaking, not true (not based on reality or fact). We then learn that lying has as much to do with motive as fact. That’s why the key concept is “bearing false witness”— speaking falsehood to circumvent justice or promote corruption.

Then we start learning more subtleties such as saying things that are actually true, but are designed to misinform or deceive. I recall reading a fun article on writing references for former employees— using language that sounds rather positive, but is actually quite negative. For a former employee who would steal office supplies, “With Howard leaving, I definitely feel a great loss in our office.”

LIes and deception get more confusing when filtered through culture. When I was in the Navy, we had a huge amount of evaluation inflation. So if I wrote about one of my men in the division, “He is a very hard worker and deserves a promotion”— that was actually a slam. I wanted him out of my division. If he really WAS a very good worker I would say something like, “This many is top-notch, the best in my division and certainly one of the best in his rate anywhere in the Navy. He should be immediately promoted.” Something like that (I am out of practice). In the first sentence above where I described the person above as a hard worker, I was not lying. That is because meaning is always filtered through culture. BUPERS was able to clearly interpret what I was writing without confusion.  I was using truthful language withing the culture of Naval evaluation language.  I recall getting a bad evaluation in the Navy. It said I was smart, capable, hard-charging officer, and certain in the top 15% of other officers of my rank in the Navy. That was a very negative evaluation— and I knew it because I was very familiar with the language of evaluations. But because the words actually sound nice, it makes the negative message feel better. The evaluation could have said, “Bob is a dirtbag and should be dumped out of the Navy at the first opportunity, ” that the wording in the eval sounds much nicer. Cultures often provide a more pleasant way to say unpleasant things.

It becomes more challenging when people are from different cultures. Living in Asia, many Americans get angry because “Asians lie.” They say one thing, but mean another. However, that is often not true. Often they will say “Yes” when they really mean “No.” However, their tone of voice, and body language, make it very clear that they are really saying “No.” Many times, I have asked something from a friend or co-worker of mine, and they say “Yes,” they can do what I ask. But I can hear and see that the word is not in line with what they mean. So I respond with something like… “Well, maybe some other time, but thanks.” Then I see the tension leave them and they smile as if to say, “I am so glad you understood what I was trying to say.” If they meant “No” why would they say “Yes” but then mix it with verbal and physical cues to point to the opposite? There can be multiple reasons… but mostly it is related to the relationship game. Saying “Yes” to a request for a favor that the person cannot or doesn’t want to grant is like saying, “Your relationship with me is important. Therefore, I will say ‘Yes’ but I hope you understand that I am really saying ‘Yes’ to the relationship, not to the request.”

These subtleties are often lost on Westerners… but, truthfully, everyone does it.

In Osoba O. Otaigbe’s book “Building Cultural Intelligence in Church and Ministry” there is an interesting help that was given to immigrants or foreign workers who were living in England. The guide was meant to help the people understand what the British mean when they say some things. Here are some of the helps.

When British people say:  “I hear what you say.”

They mean:  “I disagree and do not wish to discuss it any further.”

When British people say:  “With the greatest respect…”

<By the way, despite what one sees on some military TV shows, such as NCIS, military personnel do not say things like “With all due respect…” or “Request permission to speak freely.” At least they didn’t when I was in the Navy. That was because bot statements were universally understood to mean, “Captain, you are full of %$@&!”>

When British people say:  “Not bad.”

When British people say:  “Quite good.”

They mean:  “A bit disappointing.”

They mean:  “This is the primary purpose of the discussion.”

When British people say:  “That is an original point of view.”

When British people say:  “I am sure it is my fault.”

This is not strictly a British thing.

When my dad would say, “Oh… can’t complain.”

He meant:  “I am have most excellent time, thank you.”

They mean:  Very little beyond “I acknowledge your passing near me.”

When Christans respond to a request with “I will pray about it.”

They mean:  “I don’t plan to be of much help, but I hope things turn out okay.”

They mean:  “I think you are okay of a person, but not okay enough to spend time with.”

They mean, “I don’t plan to reprioritize may schedule to accommodate you.”

It is pretty clear that language is filtered through culture and context. As such, where meaning is accurately transmitted from one person to another in one setting, may very much deceive in another.

In missions, meaning matters. Meaning is found in sentences not words, and in context, not in a “vaccuum.” This is one of the many reasons that effective communication is so difficult on the field.  Unlike the show “To Tell the Truth,”  our goal is not to deceive but to inform and enlighten. But it is easy in the mission field to confuse and deceive by telling the truth while not understanding the context.