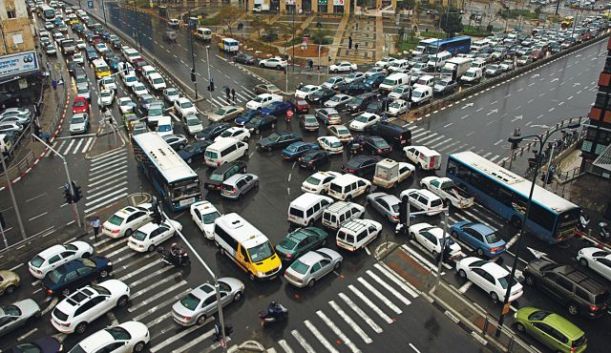 A political election is coming up in the US this November. They are a challenge for me because my friends come from a wide variety of perspectives. I sometimes find myself siding with one side and sometimes with the other, but never consistently with either side. The reason for this is that “I Love Gridlock.” I suppose it depends on how one defines it. One definition comes your friend and mine, Wikipedia. It says,

In politics, gridlock or deadlock or political stalemate refers to a situation when there is difficulty passing laws that satisfy the needs of the people. … Gridlock can occur when two legislative houses, or the executive branch and the legislature are controlled by different political parties, or otherwise cannot agree.

As an American myself, my friends almost universally hate gridlock. This is strange since it seems pretty evident that the US Constitution was designed to encourage gridlock, as opposed to the classic parliamentary system.
So why would I like gridlock? I like it in government and in ministry for several reasons.
1.  It slows things down. I have been part of groups… in fact I have led groups… where decisions were made fast or even “on the fly.” I often loved that. However, over time I realized that issues that were struggled over were often resolved better than ones that were thoughtlessly approved, or “railroaded” through.
2.  It encourages negotiation. When there is one or more people with all of the power, there is little discussion. Things just happen. I have been in church or religious organizations that were led by one visionary person who made all of the decisions. I have never seen that work out well. No one is right all of the time. Most are not right half of the time.   Proverbs 11:14 says, “Without wise leadership, a nation falls; there is safety in having many advisers.” However, when the advisers are more than simply “idea guys” but have a vote in the process, they are likely to have better thought-out decisions, and the leadership can’t simply ignore such advice and act on personal whims.
3.  It allows all parties to feel empowered, or at least jointly disempowered. Solomon may have been the “wisest man” (in terms of governance at least), and made some really awesome decisions for the short-term prosperity of Israel. However, he also made some decisions that were KEY to civil war and moral breakdown of his country. It is interesting that one of the things he did was to crush gridlock by establishing a structure for governance that undermined tribal leadership. It is hardly surprising that when Solomon’s untrained son took over, the tribal leadership that had their interests steamrolled in the past, flexed their political muscles and split the nation.
4.  It lessens groups from acting on their baser instincts. In some countries, when one political party or political leader gains ascendancy, they quickly seek to consolidate power by outlawing or at least hobbling all dissent. Even where this is not done legally, laws are commonly passed that give more power to the majority and stick it to the minority— or benefit their primary (financial) supporters.
5.  It shares power. People in government and in ministry commonly don’t handle power well.  Although it has almost become a cliche, John Dalberg-Acton’s words are still true: “Power tends to corrupt, absolute power corrupts absolutely.” Diffusion of power is better than its localization.
So does that mean that I actually like the phenomenon where lawmaking slows to almost a standstill because of power struggle and rivalries? Somewhat. Laws and plans should be slow… and probably should be developed slower than anyone is particularly comfortable with. However, my main reason for supporting gridlock is that it shares power, and provides impetus for negotiation, compromise, and consensus-building. If those involved cannot “play nicely together in the same sandbox” and work together for the common good of the organization or nation, they simply need to be replaced. That seems like that should be obvious. We don’t vote for ideologues or demagogues but with people moral vision and the humility to understand that they must work together with others, even people they disagree with.
Hoping you will have the opportunity to experience gridlock in your own ministry or organization (whether you like it or not).
I will end this post with a wonderful quote on power and leadership from Monty Python. Enjoy.

We would like to apologise for the way in which politicians are represented in this programme. It was never our intention to imply that politicians are weak-kneed political time-servers who are concerned more with their personal vendettas and private power struggles than the problems of government, nor to suggest at any point that they sacrifice their credibility by denying free debate on vital matters in the mistaken impression that party unity comes before the well-being of the people they supposedly represent, nor to imply at any stage that they are squabbling little toadies without an ounce of concern for the vital social problems of today. Nor indeed do we intend that viewers should consider them as crabby ulcerous little self seeking vermin with furry legs and an excessive addiction to alcohol and certain explicit sexual practices which some people might find offensive. We are sorry if this impression has come across.