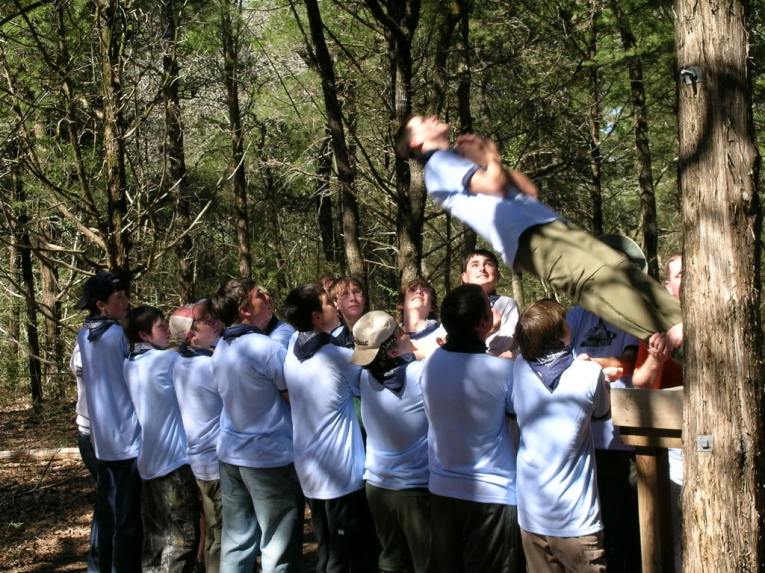 Years ago we would do an activity that was called the Trust Fall. It was done at summer camp, at church sometimes, and in some Group Process courses in colleges and corporate team-buiding activities around the world. It is pretty simply. One person crosses their arms, and from a standing position leans backwards and allows him/herself to fall. This violates the person’s natural instincts. The goal is to override that self-protection by trusting that other members of the team will catch.

Occasionally, we would find someone who would struggle with this. They would hesitate and vacillate. Some would eventually do it, others would walk away, and still others would start to go to a sitting down position as instinct took over. In “Tuesdays with Morrie,” Mitch Ablom speaks of doing this in Sociology class and having most of the class unwilling or unable to do it… at least at first. I was never in a group where more than one or two had a problem with the exercise.

For those who would go through with it, the team would be there to save the day— usually. But not always. At Summer Camp we had a four-foot platform to stand on. One would stand on the platform and fall backward while the rest of us would be there to catch. We all took turns. My sister was on the camp staff along with myself. She got onto the platform, turned around and fell backwards. Unfortunately, we weren’t expecting her to be ready so quick so we were still goofing around as she fell. Some of us were able to react in time and slow her fall. Her head and shoulder hit the ground. We were very apologetic. She got up, climbed the ladder stood on the platform and when we were ready, fell backward again. We caught her that time.

I was always good at Trust Fall. I never had trouble with it, and in fact never really understood why some do. One might think that I am a very trusting person, but I don’t think that is the case. I have generally found that people are not particularly reliable. I find trustworthiness to be a rare quality.

So why wouldn’t I have trouble with this activity. If trust is not the reason, maybe it was invincibility. If I hit the ground, I can just bounce back up (like my sister did). In fact, in a different team activity, (Electric Fence), I summersaulted over the “electric fence” and my guys failed to catch me and I ht the ground pretty hard. But I survived. Still, I am not sure invincibility was the reason either. It certainly would not be the reason now. I guess, the reason was that I felt that the activity forced one to act like one trusts the team, so I acted as if I trusted them.  That sounds weak, but I suppose that is what faith is. Faith is know certainty. Saving faith is the recognition that I can’t do it alone, and I can’t trust others, I must trust God because I have no other choice. Most other religions are built around the idea of trust in self in one form or another. If I am good enough (heart lighter than a feather, less than 10% ‘bad,’ or something else), then I can earn eternity. Christianity gives no such position to hope in oneself. (And this makes sense to me personally, since I know that I am not particularly trustworthy either.) I trust God because I have no other choice. There is no other place worthy of my trust when it comes to eternity.

Now you may be thinking this to be a bad lesson. You may be saying, “The Trust Fall is meant to build trust in a team, NOT teach people to act as if they trust them (while not actually trusting them).” But I would like to disagree, and look at it from the standpoint of Christian Mission work.

Missions is a team sport.  It is not boxing (although boxers does have a team that stands by them in their corner). It is not running a sprint or a marathon (although runners also have trainers and supporters). Christian Mission work is most definitely a team sport, more like basketball, football, rugby, or a host of other such activities.

Every now and then, one finds a Lone Ranger missionary, a Lone Wolf missionary. This person works without a team, without accountability. Some were kicked out of a team because of lack of reliability. Some have been burned before by those who can’t be trusted and decide that they will never be burned again. Some simply “don’t play well together in the same sandbox.” I struggle what to say about that. Jesus worked as part of a team. Even when He sent his disciples out, He sent them out in twos– in temas. Paul and Barnabas worked as part of a team, and even when they broke company, they brought in others to go out as teams.

History is full of mission teams. Occasionally, a missionary will go out completely by himself or herself. I am not sure what to say about that. Bruce Olson seemed to go out on his own and serve God effectively. But that seems rare… especially rare as a successful venture.  Most recently, John Chau, went to North Sentinel Island as a Lone Ranger missionary and died there. Was this good or bad? I am still processing all of this. Maybe I will have a better answer in a few weeks. But I have to question a calling that led him to act disconnected from a supportive team. (Maybe I misunderstand the situation. As I said, I have to think about this a bit more.)

In general, however, those who treat mission work as an individual support are hardly doing Christian missions. They are doing something… maybe even something good… but hardly Christian missions. Jethro warned his son-in-law, Moses, that he needs to serve God with a team, not by himself. Elijah served as a lone prophet and burnt himself out. Finally, going before God to complain, God told him that he needed to train up someone to serve with him and replace him. That person, Elisha, appeared to have learned the lesson of Elijah, working with others (servants) and working with the school of prophets.

My wife and I have worked with many people in ministry. Working with some has been a pure joy. Working with some others in Christian missions has been highly fulfilling. In some cases, working with others was a disappointment. Some have, please excuse the dramatic language, stabbed us in the back (not many, thankfully).

This is the lesson of Trust Fall. The lesson is not that one’s team is always trustworthy and will always “catch you when you fall.” Sometimes they don’t. The lesson is that to do Trust Fall, one must act as if one trusts the others. The same is true in Christian Missions. One trusts others not based on the Pollyanna view that people will always be trustworthy. Rather, to do Christian Missions, one must work with other people. There is always a risk in this. When I was young we sang the Gospel chorus, “Christ is All I Need.” It is a nice chorus, and soteriologically true. However, not true for Christian Missions. God has called us to work together. We need each other.

To do Christian Missions, we must accept the fact that some people will fail us. And, if we are really honest with ourselves, we are not fully trustworthy to others either. We trust others because to serve God, we must.