Of course, it is entirely possible that a story may be relevant (valuable or important) in a culture rather than resonant (connecting with the imaginations of people in a culture in a uniquely powerful way). One can suggest, then, two other categories. If a story is challenging to a culture and is relevant, it might be described as revelatory in function. And if a story relevant but not really challenging to the culture, it could be said to have an illustrative function. These are how I would use the terms at least.

In the end, all of these stories can be used to teach… to instruct. But how does one make a story that can be used in a missional or ministerial environment that has value to teach. This is not always easy and many stories that one might think should be instructional are not.

In the 1800s (not just then of course) there were a considerable number of stories that were written to be instructional, particularly in the area of morals. In part this was because of Readers that were published for school children. The McGuffey Reader was well known, but there were others. I have a Sanders Union 6th Reader published in 1860s. It has many moral stories in it. They have value to a point, but it is not that surprising that many of the shorter stories that came out of the 1800s that are remembered today had a minimal amount of instructional value. Works by Lewis Carroll or Edgar Allan Poe for example (and perhaps one might include work by Rudyard Kipling) focused on action, horror, or adventure, but not so much on instruction.

Why is that? Is it because we live in a “depraved time” where we reject moral instruction? Perhaps, yet many works with a moral/ethical message are accepted and resonate. Charles Dickens’ works from the 1800s are appreciated today despite, or perhaps even because of, a strong social and moral message. People pay (in fact many have paid multiple times) to read or watch the origin story of Spiderman… a story with a strong ethical message.

Perhaps it is best said that if a moral story fails, it may not be that the moral is rejected… but that the story is rejected. So what can be done to help ensure that the story is a strong vehicle to support and enhance moral instruction? I am not a student of storytelling but here are some musings. 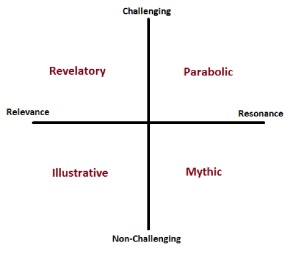 This odd story has several elements that make it unbelievable. A duck as a main character. A duck that talks. A duck that wants grapes. A duck that wants grapes at a bar. A bartender that doesn’t seem to be all that surprised to be talking to a serving a duck. Yet the scenario of someone going into a tavern and making a request, even a strange request, to a bartender is quite familiar. The response of the bartender (trying to be courteous and gradually drifting to anger and frustration) seems pretty familiar. The familiar elements provide the structure on which the unfamiliar (even ridiculous) elements can be attached to. In fact the juxtaposition of the normal and the absurd adds to the story.

I would welcome other guidance and hints for good stories that teach.