I have talked about this before… but it seems to be worthy of more thoughts. Since I have started intentionally listening for the phrase “thinking outside of the box” or the instruction “Think outside the box”,

1. The issue isn’t thinking outside of the box but understanding the difference between real constraints and areas of freedom.

Consider the classic 9 point grid. I have used this before. (Ptr. Bart Dela Cruz used this illustration for an article he wrote for our group. I will use the same basic idea but look at it from a slightly different angle.) 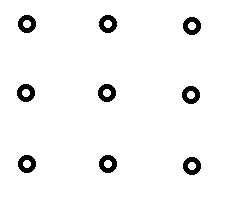 What is the fewest number of lines to hit all of the points?  Here are four possible answers: 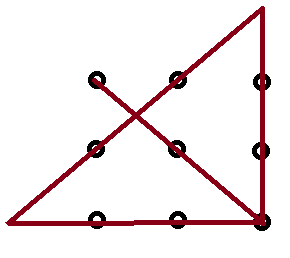 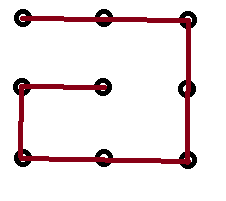 It depends on two things: DEFINITIONS and CONSTRAINTS.

DEFINITIONS:  What is a line. The last figure shows a single line. Some would argue that it is not a single line because it is curved. They might argue that a line is straight. They learned that in math class. Of course, there may be more than one definition. An artist is likely to question of limit lines to straight ones. Besides, even if one used a mathematical (and Euclidean) understanding of lines, other problems come up. In math, a line goes in both directions forever and ever and ever. That may not seem to be an issue, but when one gets to constraints… this is important. Line segments have endpoints, lines do not. One can also ask how thick is the line. In math, lines have no thickness… but in the real world they do. If one allows a thick enough line, the entire grid can be covered by one tiny part of a straight line. But we won’t worry about that (or non-Euclidean space and other novelties).

CONSTRAINTS. If one uses straightness as a limiting part of the definition, there is still the question whether the correct answer is 3, 4, or 5. One constraint would be boundary constraints. Is one allowed only to use the space with in the grid, or can one use all space. Another constraint is action constraints. For example, can one lift one’s pen during the action or no? One could also add equipment constraints, such as whether one can use a special pen with two or more marking components or a pen that can turn off and on marking while never leaving the surface of the paper. Once again, won’t concern myself with that here. 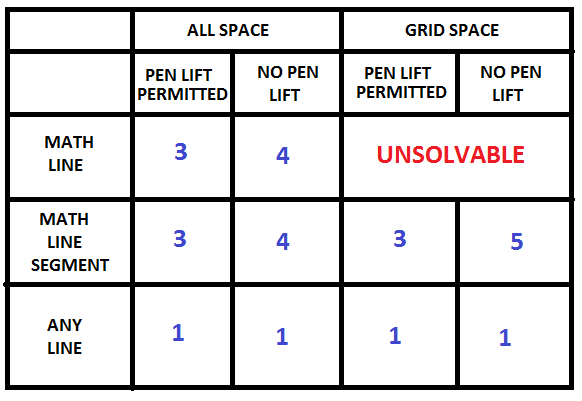 Consider the matrix above. Suppose the leftmost column describes definitions of lines and the top two rows describe combinations of constraints, then the blue and red text describes the possible answers to the question of the least number of lines to hit every point on the grid. The point is not to “think outside of the box” but to understand what genuine limitations one has and what limitations one does not have.

A little game we do in Community Development training. It is tower-building. We give two teams some materials (like string, tape, and straws). and tell them to each build the tallest tower. Sometimes we tell them that they are limited to the materials we give them (external assets). But sometimes we tell them nothing on that issue. Therefore, they are not constrained from using other stuff they can find, like desks, chairs, and the like. The point there is that in one case one is limited by a real constraint (external assets of string, tape, and straws) and sometimes one has no such real constraint. In the latter case, the real constraint is missing and so one has the opportunity to discover which team (or both) constrained by their own self-made limitations. Of course, one could take it further. One team could tape one end of the string to the ceiling of the room and let it dangle to the ground where it is again taped off and call that a tower. In such a case, the definition of what constitutes a tower (free-standing, self-supporting, or not) needs to be addressed.

In other words… the key point is to be able to separate genuine limitations (walls) one must deal with, and limitations that we may place on ourselves but are not inherent to the problem. One must recognize the difference between the real box and the box that we mistakenly create for ourselves.