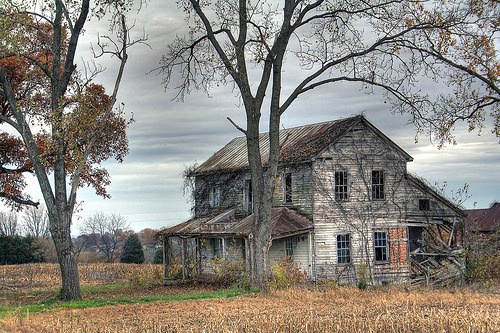 I was raised up on a hill in the Allegheny foothills known as Woodchuck Hill. While in many parts of the world civilization/development is taking over land, here things have gone the opposite way as old farms disappeared, people moved to the cities or to where jobs were, and the forest took over.

On the hill (a part that is curiously known as Emery Hill… although part of the same hill) was an old house. The picture above is not the house… it is somewhat smaller but looked at about that level of disrepair back around 1970.

When I was around 4 or 5 years old, we would, on occasion, drive by it (it was not on our main route to town). I would look at it and say to my mom, “That house is falling apart. I sure hope that it will be fixed up before it is too late.”

On one occasion of the many times I expressed hope that that house would be repaired., my mom said with exasperation, “Robby,” no one else in the world ever called me Robby. “Robby, that house will never be repaired. It is too far gone. No one will ever fix it up. You just need to accept that.” I don’t remember if I cried… but I recall feeling very sad.

Something strange happened. A few hunting buddies in the city decided to buy the house and turn it into a hunting lodge. They repaired it, fixing the roof and repainting it. Over 40 years later it is still standing.

For years… decades… afterwards, when my mom and I would drive by that place, she would say to me, “Robby, do you remember that old place. That was the place you loved as a child and didn’t want to see fall apart. I tried to tell you that there was no hope for that old house… but you were right, and here it still is. Isn’t that wonderful!?”

There is something beautiful in redemption. One form of redemption is restoration. The taking of something and bringing it back to what it was meant to be. A house is restored to a house and a car to a car. With people… restoration involves taking ruined lives and bringing them to what they were supposed to be. Ecclesiastes says

In missions, there should always be more building up, planting, healing, and sewing… redeeming through restoring.

One thought on “Redemption and Old Rundown Buildings, Part 1”