Defects are not always bad. Defects, after all, simply are things that show variance from someone’s idea of perfection. But perfection is not only unattainable… it is also unidentifiable.  Plato’s idealized forms don’t really exist… here or anywhere else.

But what do I mean by “Holy Defect.” This doesn’t mean “defective holiness.” Rather, I am suggesting that flaws may be sanctified, set apart by God as– for a lack of a better word– good.

I would like to suggest a few images/metaphors to explain and reinforce this point.

For if I do wish to boast I will not be foolish, for I will be speaking the truth; but I refrain from this, so that no one will credit me with more than he sees in me or hears from me.  Because of the surpassing greatness of the revelations, for this reason, to keep me from exalting myself, there was given me a thorn in the flesh, a messenger of Satan to torment me—to keep me from exalting myself! Concerning this I implored the Lord three times that it might leave me. And He has said to me, “My grace is sufficient for you, for power is perfected in weakness.” Most gladly, therefore, I will rather boast about my weaknesses, so that the power of Christ may dwell in me. Therefore I am well content with weaknesses, with insults, with distresses, with persecutions, with difficulties, for Christ’s sake; for when I am weak, then I am strong.             (II Corinthians 12:6-10)

I don’t know what this “thorn is.” Some suggest that it is a physical infirmity. Could be… it involves the flesh after all. Some suggest it was feelings of guilt for killing Christians in the past. I doubt that– it would be a poor choice of metaphor if it was (but could be). It could be some sort of sexual temptation or struggle. Paul uses flesh as a metaphor for, well, carnality. I work with a counseling center, and certainly Romans 7:18ff sounds a lot like what people say who struggle with sexual issues. But no one knows for sure.

But one thing I do know… it is a defect. Not only is it a defect; but it is a defect that God seems to prefer that he maintains. The defect gives humility. It demonstrates God’s grace and power.

He also told this parable to some who trusted in themselves that they were righteous, and treated others with contempt:  “Two men went up into the temple to pray, one a Pharisee and the other a tax collector.  The Pharisee, standing by himself, prayed[a] thus: ‘God, I thank you that I am not like other men, extortioners, unjust, adulterers, or even like this tax collector.  I fast twice a week; I give tithes of all that I get.’  But the tax collector, standing far off, would not even lift up his eyes to heaven, but beat his breast, saying, ‘God, be merciful to me, a sinner!’  I tell you, this man went down to his house justified, rather than the other. For everyone who exalts himself will be humbled, but the one who humbles himself will be exalted.”            (Luke 8:9-14)

Both of the individuals had defects. However, the Pharisee tried to hide his defects behind a mask of piety and self-righteousness. The publican (tax collector) freely admitted his defects and went away justified (holy) before God.

The term came originally from Carl Jung suggesting that out of the woundedness of a psychologist, comes the desire to help others who are wounded. However, more than providing a motivation for healing, woundedness also empowers healing.

A wounded healer is someone who can listen to a person in pain without having to speak about his or her own wounds. When we have lived through a painful depression, we can listen with great attentiveness and love to a depressed friend without mentioning our experience. Mostly it is better not to direct a suffering person’s attention to ourselves. We have to trust that our own bandaged wounds will allow us to listen to others with our whole beings. That is healing.

In Isaiah 53, the Suffering Servant is described as one who by whose stripes we are healed.

Wounds are essentially defects… defects that help us care for the wounds of others.

I have discussed this before in a couple of blogs: 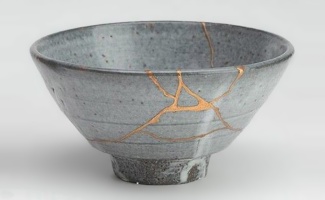 Additionally, I have a blog on a related topic, Wabi-Sabi

The idea is that there is greater beauty and craftsmanship in a beautiful repair than in hiding damage. Likewise, in a person, the power of God is demonstrated more clearly in scars, rather than their absence. This may remind one of Jesus who in His resurrected form had scars of His crucifixion as evidence of God’s power to heal– giving us hope of such healing. 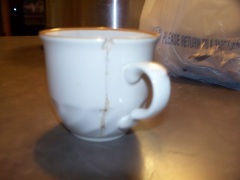 As a final thought, consider the following quote:

“The pride of the cup is in the drink, its humility in the serving. What, then do its defects matter?” -Dag Hammarskjöld

One thought on “Images of Holy Defect”