“After a significant pastoral ministry in 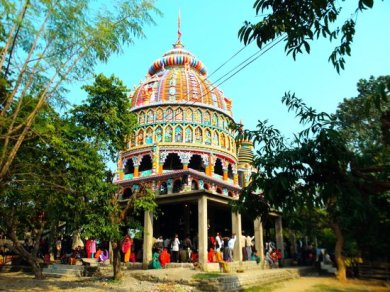 an urban setting in the United States, a former student of mine returned to his home country of India to minister. When visiting him, I asked, ‘What is the most significant obstacle you face?’ He paused and then said, ‘The biggest I’ve seen recently has been working to overcome the impression left by some well-intentioned American short-term missionaries. When they came to my village, they gathered and marched around a temple in the village, asking God to tear it down in the name of Jesus. Later one of the priests of the temple told me, ‘You Christians are no different than we Hindus. We practice Hindu magic, and Christians practice Christian magic. I know because I saw those American Christians walking around our temple seven times praying. That’s no different from what we do.’

Was this prayer-walk an example of contextualization or syncretism? I am sure they thought they were engaging in appropriate spiritual warfare and would likely cite the Old Testament story of Joshua marching around Jericho (Josh. 6) to confirm it. The Hindu priest, however, read their actions as a ‘Christian’ version of a Hindu magical practice. The long-term worker was left to sort through the mess after the short-termers returned home.”

If one accepts these definitions, then the STMers were certainly acting on magical thinking just as the Hindu priest stated. Of course, Christians seek to serve God… but entreating God is not outside of the Christian faith, so Christians should be mostly religious in their thinking, but still a bit magical, in thought, as well (based on the above definitions).

As far as whether these STMers were doing good contextualization or syncretism (over-contextualization), I would argue that neither was the case. Probably they were guilty of non-contextualization. Most likely they were bringing over the theology of “spiritual warfare” that they were taught in the United States. It is entirely possible that proponents of this sort of “spiritual warfare” or “power encounter” (such as Charles Kraft and C. Peter Wagner, along with others, developed) can be faulted with syncretism, but not these short-termers. They just took what they were told in the US to do, and did it. Additionally, grabbing the Jericho story and applying it to their situation is no more contextualization than if one of them brought five stones and began to fling them at the temple using a sling (another perfectly “Biblical” activity).

But if this group was only guilty of poor contextual theology and perhaps confusing a Hindu priest (although he doesn’t sound particularly confused) that would be understandable. What is much more worrisome is that their behavior was a poor reflection on Christ.

There is, in my mind, no satisfactory justification for publicly praying down a temple (or mosque or something similar). You might be tempted to say that it is justifiable because we find some kings of Judah praised for tearing down Ashteroth poles and the like. But even if it was done as part of national policy, I don’t believe there is examples of Jewish believers going to other lands to desecrate or attack other temples in other lands.

The city clerk quieted the crowd and said: “Fellow Ephesians, doesn’t all the world know that the city of Ephesus is the guardian of the temple of the great Artemis and of her image, which fell from heaven? Therefore, since these facts are undeniable, you ought to calm down and not do anything rash. You have brought these men here, though they have neither robbed temples nor blasphemed our goddess. If, then, Demetrius and his fellow craftsmen have a grievance against anybody, the courts are open and there are proconsuls. They can press charges. If there is anything further you want to bring up, it must be settled in a legal assembly. As it is, we are in danger of being charged with rioting because of what happened today. In that case we would not be able to account for this commotion, since there is no reason for it.” After he had said this, he dismissed the assembly.

But there is more:

3.  There is no way that people will recognize the love of Christ in people seeking destruction of a people’s treasured structure. In a somewhat parallel even here in Baguio City a few years ago, pastors and missionaries were joyous that they had managed to prevent the building of a mosque in the city. But why be overjoyed? The blocking of such a building was very temporary, it was probably illegal in a country that supports freedom of religion, and certainly helped poison a positive of witness of Christians in the Muslim diaspora here.

4.  It is inconsistent with the Golden Rule. If one is bothered by others attacking, destroying, or praying against church buildings, than one should certainly not take any of those stances against other houses of worship.

I think that if they truly felt the need to pray against the Hindu temple, they could have done so quietly and privately. Why hamper Christian ministry by behaving publicly in such a disrespectful manner?

(By the way, I do strongly recommend A. Scott Moreau’s book. It is a great expansion of Bevan’s book on Contextual Theology. One can click on the title after the top quote to get more info on it.)