The term “Cult” gets used and abused quite a bit. Actually Wikipedia has a nice article on the term “Cult” and its many different usages. Starting from the perspective of orthodox/historical Christianity, I  would like to look at the word in terms of “Good”, “Bad”, and “Ugly” and then take a more “functionalist” look at the term “cultic”. 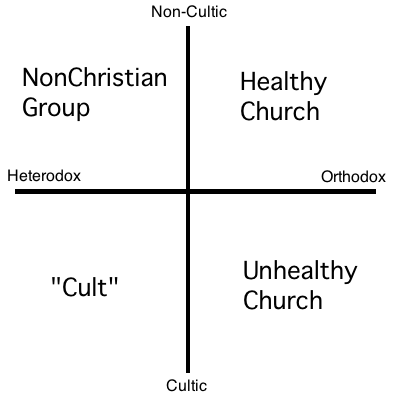 In the diagram above, the quadrants are based on whether a religious group is Orthodox or Heterodox (from a historical Christian perspective, that is) and whether it behaves in a “cultic” or “non-cultic” manner.

I think that a lot of us have a certain thing in mind when we use the term cult or cultic. We are talking about groups that are heavily authoritarian, abusive, and tear down the individuality or selfhood of the individual.

Authoritarian:  Unconditional obedience to the leadership.
Averse to Criticism: The person who dissents is a problem to fix– not the issue brought up.
Image Conscious: Protecting the reputation of the leaders or church is more important than truth or justice.
Perfectionistic: Individual worth is determined by performance. No compassion for weakness/failure.
Unbalanced:  Group distinguishes itself by  overemphasizing a minor theological point.

With this in mind, religious groups can be divided into the class four quardrants.

The term “cult” traditionally meant a group of people who came together for worship. In some languages, cult (or cultos) does not have a negative connotation. So if a group is Orthodox (good theology) and not behaviiorally “cultic,” one could view this as a Good Cult, or a Healthy Church.

So for some people the term “cult” may be used here, but doesn’t identify something bad, but rather something good.

I would like to suggest that the term “cult” can refer to groups that would ultimately be BAD. Many Christians refer to any group that is not orthodox as being a cult. This may not be useful. But it is reasonable to separate between groups with sound Christian theology and those that do not.

Quadrant #3: The BAD.  (not cultic, but still heterodox)

Heterodox groups could be described as being “Bad” cults. With this definition, however, some may have cultic traits as I have listed above, and some may not. Not all non-Christian religions (or heterodox religions with Christian roots) are cultic. Some others are cultic in their behavior/operation. Ultimately, both of these are “bad,” from an Orthodox Christian perspective The groups that are heterodox and cultic, are often what much of the broader population calls “cults” today. Ultimately, from a Christian perspective any group that has teaching that nullify or distort the Gospel  (even if they are not behaviorally “cultic” could be described as bad.

Quadrant 4: The UGLY. (“cultic” but not, strictly speaking, heterodox)

I would like to argue that cults at there worst are cultic in their behavior and orthodox in there essential theology. Why is that?