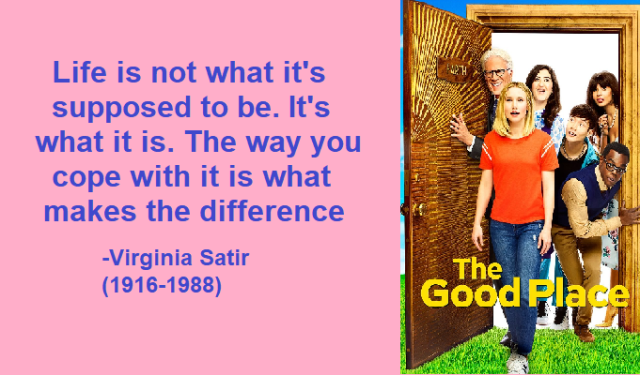 My wife and I just started binge-watching “The Good Place” a few days ago. Before that, we had not heard about it— it was only at the suggestion of our daughters that we looked it up and began watching. Being a Newbie, I don’t know to what extent the show has been analyzed. It is a situation comedy show of people who died and are brought together to a heavenlike place that is known as “The Good Place,” as opposed to “The Bad Place” (and we find that there is even a Middle Place). It is not meant to be Christian. It isn’t. It is also not that deeply theological, at least in terms of adherence to a recognized religion’s theological doctrine.

It generally builds on the nearly universal (well certainly very common across cultures) human belief that the universe works on a sort of a weighted scale. Your actions, motivations and the influence you have on the world around you is weighed, and if found good, you go to the good place– a place of delight. If you are found wanting, you go to the bad place… a place where one exists in a place of banal tortures. This operation does not need a Savior, as it does in Christianity. On the other hand, it doesn’t involve a disconnected self-enlightenment, such as in Buddhism, either. We grow as people through interaction with others… and it is in these interactions that our life is measured.

<The story line of the series changes considerably from Season 1 to 2 to 3. I will generally seek to avoid spoilers Especially beyond the middle of season 2.>

While theologically the story is not hugely innovative. It is in psychology that it gets more interesting. My wife noticed that the storyline appears (perhaps intentionally) to work based on Virginia Satir’s Growth Model in Family Systems (a field of Psychology).

In the show, Elanor is a blamer. She is aggressive and avoids taking responsibility. Chidi is super-reasonable. He is bookish and analyzes and over-analyzes rather than addressing relational and emotional issues. Tahani is the placator, seeking to be liked by everyone, being a people pleaser. Jason is irrelevant… missing the issue entirely or acting in a way that is often quite random and not towards addressing the stressor. This is over-simplified, but is quite clearly established.

This is not alone. Other stories often build around these four types. Consider “The Simpsons” that tends towards Homer being the blamer, Marge the placator, Lisa the super-reasonable, and Bart the irrelevant. The Simpsons doesn’t appear to use this model intentionally (but who knows?). In The Good Place, this appears to be intentional.

In The Good Place, it is taken even further. The plot initially builds around an experiment where the four dysfunctional copers are brought together in a seemingly idyllic setting and seeing whether they can “create their own hell.” This is in line with Satir’s Transformational Systemic Theory. In that form of therapy, the goal is to bring relational transformative growth to a group (especially a family) as well as individual through interaction/communication. In the therapy, new elements are brought in that leads to a period of chaos. Out of the chaos is meant to come growth. In the first seaon of The Good Place, the elements that bring chaos are thought to bring misery and a spiralling out of control of the people involved. However, what is found is what Satir theorizes which is a much more positive view of people’s ability to grow and change through the interaction. They help each other.

As we move into season 3, this theme is taken further almost into a Satir-type therapy session where the experiment has changed to an even more important question– Are we able to change? A fifth character, Michael, actually takes on an almost therapist-like role of coming in at times to bring in new elements to push the group towards corporate and individual growth.

The show has been analyzed by others as to its addressing moral philosophy. Considering how low moral philosophy has been relegated in recent decades, it is nice to see an attempt to revive it and even make it somewhat accessible to the masses. I find it nice to find a comedy, a light-hearted romp, that actually takes seriously some very fundamental concerns. While some may complain about the “bad theology,” the show makes it clear that the setting is driven by the human relationships. The theology is just there to make the premise of the relational interactions plausible.

The show in this sense reminds me of the movie “Inside Out.” It tries to use and explain psychological understanding of human development and emotions. The setting of much of the movie is a control room in the head of the preteen girl with beings that serve as the emotional guides. One is not supposed to reify (consider them to really exist). It just serves as a device to set up the interactions in a way that make sense to us.

Brings things back to ministry and theology, I think of the ham-handed way that Christians commonly express their faith in artistic ways. Typically, it has an “in-your-face” and overly simplified manner to it. Frankie Schaeffer talked a bit about it years ago in his book “Addicted to Mediocrity.” Christians today (most definitely including myself) definitely struggle with: