I have recently begun reading the book Participant Observation by James Spradley. I suppose I should have read it years ago… but better late than never. In Chapter One he references Herbert Blumer (1969) and his work Symbolic Interactionism. Three premises of this theory are (in my own wording)

I have seen this as I have been reading FB posts recently. Often I have wondered if I should stop reading them.  I have a melancholic temperament, and a lot of the social media of Christians is quite depressing. However, maybe instead of complaining at the freaky things people share on FB, I should embrace my involvement in terms of Partcipant Observation.

Recently, I was reading a thread on FB that was coming up with stronger and stronger language to speak against former US President Obama, and former presidential candidate H. Clinton. Eventually one conversant described Obama as the Antichrist and Clinton as the “Whore of Babylon.” I hope I don’t need to say that this is a huge abuse of Scripture and Scriptural language, Despite this, the person got quite a few “Likes” for the post. Since most all of the conversants in the thread would consider themselves Christians, and even use the label “Bible-believing,”  why would they say or like a statement that was, arguably, a heretical interpretation of Scripture (from a section of the Bible that appears to curse those who do just such abuses to the Word)?

Godwin’s Law states “As an online discussion grows longer, the probability of a comparison involving Hitler approaches 1.” While this is commonly applied to arguments, you will notice that Godwin’s Law doesn’t actually specify argument. When a bunch of people get together who share the same beliefs, there is often a tendency to play one-upmanship with each other making more and more radical statements.

For some Christians, Hitler (or other authoritarian abusers and killers) does not describe consummate evil. Rather, Satan, or demons, or the Antichrist would be the substitute for Hitler. The use of the term “whore of Babylon” is clever in that it sexualizes the insult— as seems to be always the temptation when men (or women) want to denigrate a woman. Of course, the “whore of Babylon” is a system and not a person (as, probably, is the Antichrist) but that is not the point. Both terms are symbols. 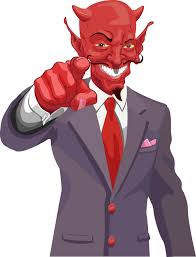 For the FB discussion… Obama and Clinton represent a challenge to power— legal power, political power, social power. As such, they are seen as a threat to some people. Threats gradually lead towards demonization (or Hitlerization). In the case of Obama and Clinton, it is not so much who they are (they don’t seem to me to be worthy of much applause or castigation— they are just people who are involved in US politics). Rather, for those who see Obama or Clinton as threats to power, they symbolize something bigger.  When people attack them, they are attacking what they symbolize.

Of course, one does not have to be in a position of power to fall into this trap (and it IS a trap). Over here, the President of the Philippines occasionally states things that insult or attack the Roman Catholic Church— the largest religious group in the country. Many Evangelicals have applauded this. Why?  Again, the Catholic church has considerable power in the country, and as such, there is the temptation to see them as the enemy. (Of course, if they actually were the enemy, then we would have to embrace the teachings of Jesus and love them, not applaud attacks on them.)

But going back to the three premises of Symbolic Interactionism, none of this is inevitable. We connect to things (and people and concepts) based on the meanings we give them. As such, meanings are flexible… they can change. Today, I was in seminary chapel, and the speaker noted how wrong it was for Protestant Christians to applaud the attacks on our Catholic brothers and sisters. We are not without our faults so why express joy when their faults are exposed? And when politicians use religion to divide (and conquer), why do we yield to the temptation of predictability (standing by “our guys” uncritically, and attacking “their guys” uncritically). In the case of the speaker in chapel, he was seeking to work on the 2nd premise of symbolic interactionism. He was seeking to influence his peers so that the Catholic church is no longer given the label of “the enemy” by seminarians. I would like to think that he words will have influence.

Additionally, interacting with people different from ourselves can also help. This is the third premise. I find it valuable to talk to people of other faiths, other denominations, other theological persuasions, other races, and other political and national affiliations. Often, I find there is a lot of common ground. Even when we still disagree strongly on things, the temptation to stereotype them or “Hitlerize” them goes away. Rather, they are simply (in my opinion) “wrong.” More commonly, they are a mixture of right and wrong, good and bad, admirable, and problematic. I find that picking up news from many sources reduces my tendency to embrace certain things as true and other things as fake based on how I feel about a certain subject.

While Symbolic Interactionism is a moutful to say (or type, I suppose), it expresses something of value for Christians.

And the last is perhaps the most important.

In the case of the FB thread I was describing earlier, perhaps it would have only taken one person to jump in and note that both Obama and Clinton (regardless of whatever flaws they may have) are God’s creations, worthy of love and concern— and appear to sincerely seek to live out their political life in line with the ethics that their particular Christian denominations hold. As such, they are worthy of a certain amount of admiration even if one does not ultimately agree with them on some issues. I am not sure everyone would suddenly embrace, but perhaps that person could at least have short-circuited the road to the Antichrist and Whore of Babylon.