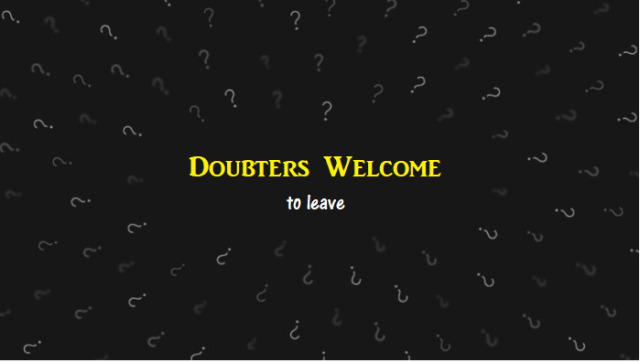 There have been some recently-in-the-news people who are famous for being Christian, who have “left the faith.” One of these is Josh Harris. When I was dating age (decades ago), he wrote a book called, “I Kissed Dating Goodbye.” I never read it. Marty Sampson, a member of Hillsong, also publicly announced his loss of faith. I avoid Hillsong as much as I can while still attending an Evangelical church.  So I don’t know much about either one in terms of who they were or who they are. So I won’t deal with them directly here.

I have read a few responses to these announcements. Some call them guilty of Apostasy (perhaps a bit premature). Some Christians appear to be genuinely angry. Not really sure why. Perhaps they are wrestling with theological issues surrounding eternal security. Perhaps there are some who have emotionally invested themselves in these people and now feel betrayed. Others were bothered, seemingly, that they chose to express their rejection of faith so publicly. But if they weren’t given a forum in church to express their doubts, it is hardly surprising that they chose a medium outside of the church. I think I would argue that it is quite refreshing that they had the confidence to share their struggles with others. I wish all of us in the church had such openness.

A more constructive response I have seen is the note that apologetics is important. One of them, Marty I think, had mentioned that a lot of the questions he had were not being dealt with in church. People have honest questions and Evangelical churches often pride themselves (“hubris themselves”?) in an anti-intellectual perspective. I remember when a Mormon roommate of mine hit me with the old classic, “If God can do all things, can He create a rock too big for Him to lift.” That did not bother me very much because even back then when I was something like 22 years old I already knew enough Christian theology to be aware that Christians believe that God is unlimited in power, and that is very different from believing that “God can do all things.” That old chestnut that my roommate shared falls apart if one understands this difference. (Of course, it is also damaged a bit if one rejects the “anthropomorphized” god of Mormonism.) But I can understand its effectiveness in dealing with Christians. That is because the phrase “God can do all things” and its ilk are so commonly used in churches, and these commonly go unchallenged and unreflected upon. I mean, if “God is good all the time, and all the time, God is good,” how does one reconcile that with experiences that show that God does not respond in a manner that you and I would consider normal for a “good God”?

Good theology and good apologetics can help. Some think that apologetics is a primary tool of evangelism. I don’t think so generally. Few come to Christ by being intellectually overwhelmed by Christian apologists. More modest goals are that apologists:

This leads to the second point— Churches are NOT generally a safe place to be a doubter.

Consider the following experiment:  Go to your church some day and when people are sharing struggles speak up and share something to the effect,

“My family has been struggling both financially and with health. This has led me to struggle with the idea that God is good. In fact, often I wonder if there is no God out there or maybe I am just praying into empty space.”

There may not be an immediate response by the group… but keep track of the different responses you get afterward.

My feeling is that the last one will be pretty rare… yet I think we all struggle with doubts at times— Faith is not the absence of doubt, but a matter of trust that acknowledges uncertainty.

If the church is an unsafe place for doubters, and

If most Christians doubt (whether they admit it or not), and

Then, church is an unsafe place for Christians

I don’t pretend to be perfect, or even good, in this area. Back a few decades ago I was in the Navy and my roommate had two friends visiting. Both of them were raised in church and both expressed to us that they they struggled with doubt about God and the Christian faith. My response was that I had no such doubt. They both expressed the desire to have no such doubt. In practice, however, it was a dead end for this part of the conversation. They opened up to me, and I responded essentially that I cannot relate to their experience. They expressed a desire to be like me in this situation, but that was impossible, since they DID have doubts. Desire does not change things. And if I was more honest with myself back then, I would have to admit that my faith was on choosing to trust in the God of the Holy Bible, rather than a certainty that I could not possibly be wrong.