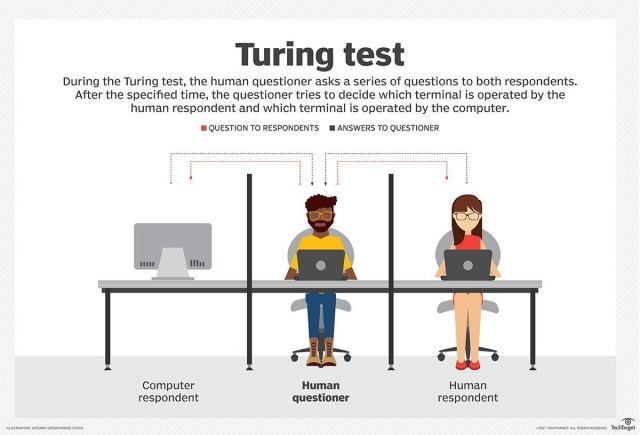 I have never been a fan of the Turing Test. Alan Turing (1912-1954) proposed a test for determining whether and artificial intelligence can think “like a human.” The test suggests that if a person was communicating with an AI and was unable to distinguish whether or not he was talking to a computer or a person, then one would see the computer as thinking in a manner that a human was thinking. Essentially, if the external behavior is similar to a human, one should assume the internal mechanisms driving that behavior is similar. This is a deeply flawed premise (as the Chinese Box thought experiment has demonstrated), showing that what may appear to be internal intelligence is simply may simply be the intelligence of the outside programmer.  That problem with the Turing Test is well understood.

But there is an even more fundamental flaw as far as I can see. It is the fact that we try to see personality patterns in the words that come our way— even patterns that don’t actually exist.  It is much like how we tend to see faces or other patterns in random dots on a wall, or in the stars in the night sky.

A great example of this is in a video on Artificial Intelligence, put out by the Youtube channel “VSauce.” Only a part of the video relates to this post. It can be found at https://www.youtube.com/watch?v=qZXpgf8N6hs&vl=en

In that video, there was an experiment that mimicked the old show, “The Dating Game.” Female contestants would ask questions of three eligible bachelors on the other side of screen. The answers would be transferred to the host to be read to the woman. Bachelors #1 and #3 were human, but bachelor #2 was a computer program. So, for example, the first female contestant would ask what his body was like. He responded with one word— “toned.” The woman thinks that he is a bit full of himself. When she asks bachelor #2 the same question, “he” responds, “I have two arms, two legs, and one head.” She decides that he has a weird sense of humor. As different women go through the questioning, some end up preferring Bachelor #1, and some Bachelor #3. But two of them preferred Bachelor #2… the computer. Why was this? Some found the answers of the computer to be intriguing, or demonstrating a strange sense of humor. This was a mistake. They were overlaying emotions and personality on a computer simulation that had neither. Even the ones that chose bachelor #1 or #3 were also incorrectly inferring personality in the computer. Some thought the prosaic answers as being condescending or snarky. This was likewise not true.

Why does this happen? As noted above, we look for patterns, and much of those patterns are based on guesses and past experiences. One female contestant determined that bachelor #2 was just like one of her ex-boyfriends. The fact was that the two had absolutely nothing in common. Some answers of #2, however, reminded her in some ways to answers she might get from her ex, and so she embued the answers with her ex’s personality. All of them did this to some extent. Inferring personality, thought processes, and motives from words is a very uncertain art.

So what does this have to do with Interreligious dialogue (IRD)?

When speaking to a person committed to and immersed in a different religion, we are talking to a person who has some serious differences in worldview. They are not aliens or completely inscrutable. However, they hold to perspectives that may seem quite alien to us. We then are affected by several things in these conversations:

This is part of the reason that in both interreligious dialogue and in intercultural encounters, one should be slow to judge. We are generally incompetent judges of what is going on inside of others. When Jesus said, Judge not lest ye be judged, I believe it is not simply an issue of love or mercy, it is also a statement of competence. We see the external, but only God sees the heart.