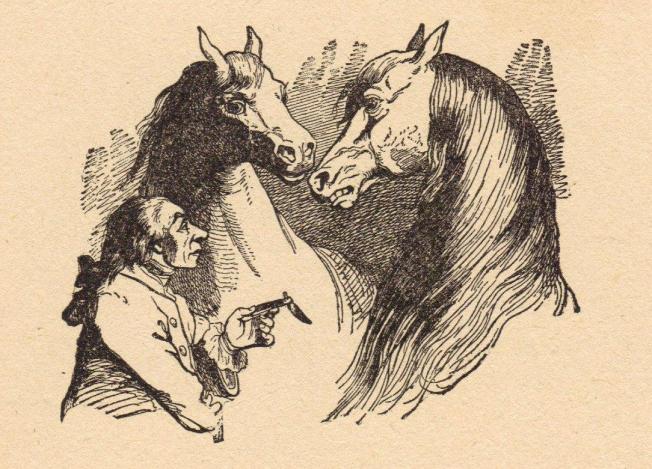 Horses have had an important role in human civilization since… well… human civilization. They have often been used to help us understand our humanity, or more often our inhumanity (such as  in Gulliver’s Travels, Black Beauty, and the War Horse). You can delve into them on your own. I will place here a couple of old old old stories that have been used, somewhat jokingly, to remind people to hope. Both of these stories I have heard from others (and likely you have as well). As such, I will tell them the way I want to… not necessarily how I or you have heard them.

Centuries ago, there was a suzerain. For those who don’t know what that is, you are certainly encouraged to look it up. But you can think of him as a “king” if you prefer. He had many vassals who paid their tributes to him. One vassal was named Thomas. Okay, his name wasn’t really Thomas, but if you found the title “suzerain” difficult, you would have an even more difficult time with this vassal’s name. So you can call him “Thomas.” Thomas had been underpaying in his tribute to the king, and was even negotiating with the king’s enemies to break free entirely from his obligations. Not surprisingly, when the king gained knowledge of this, he summoned Thomas to stand before him in his palace.

The king was not a particularly kind or forgiving man, and he threatened Thomas with hideous punishments that I really don’t think you would want to hear described, would you? Further, this king was not known for his bluster… what he threatens, he does. No amount amount of begging or promising from Thomas would sway the king.

Finally, in desperation, Thomas cried out, “Lord, you are correct that I have been to the lands of your enemy. But I have not done so as an act of treason. I have been seeking wisdom– in fact, a wisdom that has been passed down from father to son in only the most secluded places on earth. My perseverance has not gone unrewarded, however. For have have found the secret I have sought for for so long.  I have discovered… how to teach a horse to speak.”

“Mad! You are most certainly mad!” cried out the king. But he did pause to think. His royal stallion, his greatest pride after his children (or at least after 4 of his 13 children), was an animal of great beauty and noble bearing. His horse served him well in battle and in the hunt. It was more than a work animal, it was a pet. And more than a pet, it was a friend. What if it was possible that his friend could learn to talk. A king rarely has a friend he can talk to who has no desire for power, nor the slightest temptation for treachery.

Thomas replied, “Oh king, live forever. I am many things, but mad I am not. Perhaps, you give me five years, so I can teach your personal horse to speak.”

“Five years? I was right to deem you mad. I do feel merciful, however. I will grant you a stay of execution for… 1 year. If after one year, you have succeeded in your claims to teach my horse to speak, I will grant you your life. If, on the other hand, you fail… you will wish you never have bee born. Now leave my presence.” said the king, and Thomas did exactly that.

Hamid said to Thomas, “I heard you were I but I could not believe it. You are now taking care of a horse?”

“Yes. I am caring for the king’s prize.horse. I am teaching it to speak,” said Thomas.

“I heard that too. Are you out of your mind. You have promised to do the impossible. And then you will be killed!”

“Hamid,” replied Thomas. “I have a year, or now 9 months. And a lot can happen in that time. In that amount of time, the king may die. Or maybe the horse might die. Or perhaps I die. Or maybe, just maybe, I can teach this horse to speak.”

That’s the end of the story. The lesson is that where there is life, there is hope.

The second is actually an old joke.

Two privates in the army kept getting in trouble with their sergeant. The sergeant decided not to write them up again, because it never seemed to make a change in their insubordination. Instead, he sent them to work in the Army stables. Horses are not part of war anymore, they are kept for parades, and also for training men.

The two privates were brought to a room that was filled high with manure. Higher than the tops of their heads. They were given manure forks and shovels and told to bag all of the manure and carry it outside.

Both began working. It was a miserable job especially on such a hot day. It was also a slow work. But one of the privates seemed excited in the work, while the other one was very grumpy and slow.

Finally, the one who was grumpy and unhappy said to the happy, hardworking partner. “Joe. I don’t get it. This job sucks. Why are you acting so happy. This is miserable!”

“Paul. Look at all this manure! With all of this manure, there has to be a pony here somewhere! I’m going to find it.”

This story is a bit farcical. But it is also about hope. The messes we meet may be evidence of a blessing.