<I expressed in my last blogpost a LOT of skepticism regarding some so called prophecies that are marketed here in the Philippines, especially as it relates to the the recent typhoon here. Just so I don’t sound completely like a grumpy cynic, here is a very different tale.> 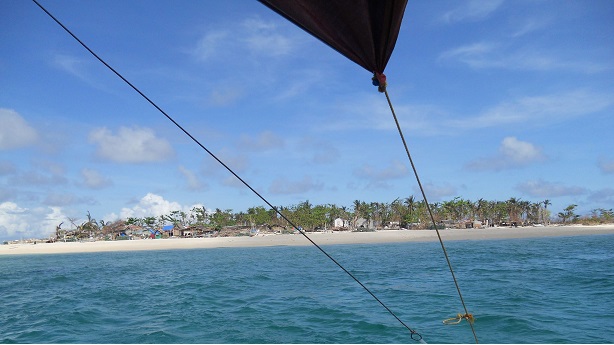 Last week, our group trained and sent off a disaster response team. We called it the Iloklan Team— short for Iloilo and Aklan, two provinces in the Philippine Island of Panay. My wife and I did not join the trip, but we helped train, fund (through supporters), and organize the disaster response trip. The Iloklan team (six members: Angie, Ptr. Ysrael, Fhey, Joylene, Lea, and Raymark) worked at two sites. One was in Kalibo, Aklan. The other was Concepcion, Iloilo. In both places they gave relief goods, and provided crisis stress defusing, and child art therapy. Additionally, they provided dozens of galvanized iron roofing sheets for church repair in Kalibo, and they did a Rapid Community Assessment in Concepcion. This is normal stuff in disaster response. But the site in Concepcion was quite exceptional.

Concecion is a part of the province of Iloilo, on the large island of Panay and some outlying islands. One of those islands is the tiny island of Baliguian. It is hard to find. You can find it on Google Earth if you know where to look. There is even a picture available of the beach… it is a beautiful place. Some other characteristics:

Frankly, it seemed doomed. One would be hard pressed to think of a worse place to be on that day than on a tiny flat atoll island directly in the path of Typhoon Yolanda. And, in fact, they did suffer physical damage, and many of their boats were destroyed. But it would hardly be surprising to have discovered that the island was completely washed out with the residents drowned in the Visayan Sea. That sort of thing has certainly happened before. Apparently, the mayor of Concepcion rode a helicopter soon after typhoon had passed. He was pleasantly surprised, perhaps even shocked, to find the island’s population doing relatively well.

This is their story (this is what I was told by our teammembers who spoke to the residents of the island… filtered from Illongo, to Tagalog, to English). The residents of the island saw the dire situation at the height of the storm, the waves were increasing and a giant wave reared up appearing able to wash over the tiny island destroying everything. They prayed to God (the residents are Catholic or Baptist– the two groups peacefully sharing this tiny island). They said that at that time a bright light shone (they did not know the source) and the wave subsided. They said that people in the distant hilly islands of Concepcion related they also saw a distant light in the direction of Baliguian Island. The island and the residents were saved.

For me… I don’t know. I wasn’t there. And it doesn’t matter what I believe. What matters is what it means to the people on this tiny island. To them, they would say that they prayed to God and God calmed the storm, saving them and their tiny island. Some now say they live on “Miracle Island.”

This story does not negate the huge tragedies suffered by so many in the Visayas of the Philippines in the recent weeks. It doesn’t even negate the damage sustained physically and economically to the community on Baliguian Island. But it must be a great comfort to the people of this tiny island so removed from the rest of the world, when they were so utterably vulnerable, to be convinced that God remembered them, loved them, listened to them, and protected them. They focus on God’s mercy, rather than temporal losses.

How might we be different if we (not just mouthing such sentiments) had such a deep down certainty of these truths?

One thought on “A Tiny Refuge in a Big Storm”