Two demons were talking in the office during their decaf break.  The first demon, #10215, turned to the second demon,  #31244, to talk business. It was a requirement at their firm to only discuss business during decaf break. They were also required to address each other by their full names at all times: but #31244 and #10215 were rebels.

“Hey 44,” said 15. “I have heard that you are really ruffling some feathers and scales with the guys in management.”

“Yeah. but not my fault. They are old guard and just can’t embrace new possibilities, 15.”

“But who can blame them, 44. Our business is Lies. The boss is ‘The Father of Lies.’ He claims he invented lies… if you can believe anything he says. To start marketing Truth seems pretty off-brand for us.” 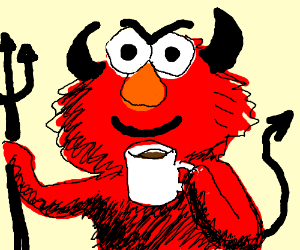 “That’s their problem,” responded 44.  “They think the goal is the product. But the goal should be the results of the product, not the product itself. If the Truth creates as good or better results than a Lie, we need to grab that niche before someone else does.”

“Of course,” stated 44, also a supporter of this corporate policy. “Our goal is to undermine faith, or adherence to the truth. An obvious way to make this happen is to encourage people to believe a lie in its place. The problem is that lies commonly have a shelf-life, going bad and revealing themselves as lies at inconvenient times. Truth has the advantage of standing up to both time and scrutiny, so if truth can be used to undermine faith then it can often be more efficient in the long run.”

“How do you do this?” queried 15, wishing to extend the exposition further.

“It is so simple. Just change the tone of truth so that it guides people to the wrong response. There are an awful lot of truths that are pretty unpleasant. One needs hardly to make the effort to create lies. Just tell the truth in such a way so that it engenders FEAR or ANGER, or sometimes MISTRUST. Put out some truth as a story that has the implicit message that one should be very fearful rather than courageous. Or put out a story that suggests that one should sit around and be oh so very angry. It hardly matters at what— anything as long as it doesn’t get directed to constructive action. In some cases, we can also share a truth in such a way that leads people to mistrust whole groups of people or sources of information. This can actually innoculate people to understanding the bigger picture and to respond in faith rather than fear and anger.”

“How do we promulgate the truth? That really is not our specialty.”

44 laughed derisively (the only form of laughter allowed during working hours). “We just give these messages to Christians, and tell them that they simply must share them with all of their friends on social media. You would be amazed at how hard Christians will work to steer people away from faith!”